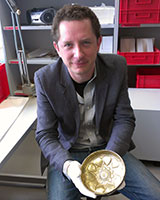 The Material Life of Jeanne of Flanders

This project, a book-length monograph, is an interdisciplinary study of the life of a relatively unknown medieval noblewoman as told through her personal possessions and artistic commissions, to include her prayer book, seals, and tomb effigy. Although her objects do not offer the splendor of some royal artifacts, they are united by display of salient elements of her heraldic identity, including armorial shields and meaningful deployment of heraldic animals. It emerges that the verbal and visual contents of her possessions are at once powerfully discursive and thematically coherent. Pursued through critical lenses of cultural-geographical and feminist frameworks, this study adds further nuance to our understanding of medieval noblewomen as makers and shapers of meaning.

Richard A. Leson is a UW-System Fellow for 2013-2014. He is Assistant Professor of Art History at the University of Wisconsin-Milwaukee, where he teaches courses on medieval art and museum studies. His research on various aspects of thirteenth and fourteenth-century French manuscript illumination has appeared in the journals Gesta, Studies in Iconography, and Arte Medievale. His current research concentrates on semiotics of heraldic display. He will spend the spring of 2014 completing research and writing for his book project.