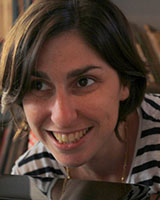 Between God and Land: On Sovereignty, Indigeneity, and Religious Freedom

Dana Lloyd is a Ph.D. Candidate in Religion at Syracuse University. She grew up in Tel Aviv and received her LL.B., LL.M. and M.A. (philosophy) degrees from Tel Aviv University. She practiced law for several years, focusing on human rights law and labor law, before moving to the U.S. and starting her doctoral studies. She studies the relation between law and religion, more specifically, on the relation between religious freedom and land rights, in the U.S. and in Israel/Palestine. She is at work on her dissertation entitled “Between God and Land: On Sovereignty, Indigeneity, and Religious Freedom.”