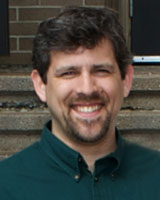 The Devil’s Church: Evangelicals and the Movies

Dr. Luft’s current research considers several questions, including: Why did evangelicals single out commercial cinema for special condemnation during the first half of the twentieth century? Why did their expressed hostility toward movies begin to decline in the 1950s? And what conclusions can we draw about contemporary evangelicalism by studying this period of transition in the 1960s when evangelicals reconsidered their widespread stance against all movie-going?

Shanny Luft received his M.A. in Religion and Culture from Boston University and his Ph.D. in Religion in America from the University of North Carolina at Chapel Hill. He taught a variety of classes in Religious Studies at UNC-Chapel Hill, Meredith College, and the College of Wooster before coming to UWSP in 2009 with his wife and two children. His research interests include religion and popular culture, new religious movements, and American evangelicalism and fundamentalism. He is currently writing a book about evangelical and fundamentalist rhetoric toward Hollywood during the first half of the twentieth century.