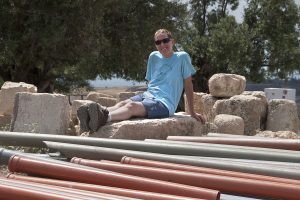 Jerusalem Through the Ages

What makes Jerusalem special? Why is it sacred to billions of people worldwide? What drew the first inhabitants to this spot, and how did it become one of the most contested places on earth? My book, Jerusalem Through the Ages, answers these and other questions as it tells Jerusalem’s story from its beginnings to the Middle Ages from a non-denominational perspective. The book provides a richly illustrated, authoritative, and up-to-date account that interweaves archaeology, history, and religion.

Jodi Magness (www.JodiMagness.org) is the Kenan Distinguished Professor for Teaching Excellence in Early Judaism in the Department of Religious Studies at the University of North Carolina at Chapel Hill. She is also a member of the American Academy of Arts and Sciences, and past president of the Archaeological Institute of America. Her research focuses on the archaeology of Palestine in the Roman, Byzantine, and early Islamic periods, and Diaspora Judaism in the Roman world. Magness has published eleven books, three of which have won awards, including her most recent book, Masada: From Jewish Revolt to Modern Myth (2019), and The Archaeology of Qumran and the Dead Sea Scrolls (2002; revised edition June 2021), as well as dozens of articles in scholarly journals and edited volumes. Magness has participated on 20 different excavations in Israel and Greece, including co-directing the 1995 excavations in the Roman siege works at Masada. Since 2011, she has directed excavations at Huqoq in Israel’s Galilee. Magness has produced two courses with The Teaching Company’s Great Courses and has been invited to deliver the 2022 Schweich Lectures in Biblical Archaeology for the British Academy.