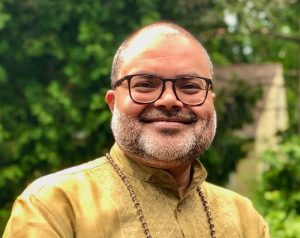 No Forwarding Address: The Global Novel in the Age of Refugees

No Forwarding Address is a study of refugees in contemporary literature. My book underlines the centrality of refugees in the making of a new “global” novel, which is multi-locational, multidirectional, and multi-temporal. Discussing novels from Afghanistan, India, Iraq, Sri Lanka, Syria, Germany, and the US, my book pursues multilingual comparative investigations of the genre’s aesthetic and political charge. Starting in the 1940s and ending in the current period—two eras marked by refugees—I argue that studying the figure of the refugee is vital for uncovering histories of racist populism and ethnonationalism on a global scale.

B. Venkat Mani is Professor of German and World Literature. He is the author of Cosmopolitical Claims (2007) and Recoding World Literature (2017; winner of German Studies Association’s DAAD Prize; Modern Language Associations’ Aldo and Jeanne Scaglione Award for best book in German Studies). He has (co-)edited several volumes including A Companion to World Literature (Wiley Blackwell 2020; finalist, American Association of Publishers’ Prose Award). His work on racial, ethnic, and religious minorities with a focus on migration has also appeared in the Journal of World Literature, PMLA, Profession, German Quarterly, Gegenwartsliteratur, The Wire (Hindi), Inside Higher Ed and Telos. Previous fellowships and grants include Mellon-Sawyer Seminar Grant, Alexander von Humboldt Experienced Researcher Fellowship, Title VI Grant for Center for South Asia, and residential fellowship at the Leibniz Center for Literary and Cultural Studies, Berlin. Mani also serves as Diversity Liaison for the Division of Diversity, Equity and Educational Achievement.