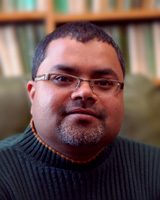 Transposed Signs of Modernity: German Orientalism and the Indian ‘Timespace’ (1786-1990)

The aim of this book is to locate modernity at the intersection of colonial politics and orientalist epistemology, and to follow its trajectory as it traverses through non-European artistic and intellectual production. This book traces modernity as a narrative of mutual, if not necessarily coeval, exchange between Europe and non-Europe. As objects of its investigation, the book focuses on German writings on India from the early 19th to the 20th centuries; Hindi films made by German directors in Bombay in the early-to-mid 20th century, and Indian textual/critical engagements with Germany – especially in Hindi and Urdu writings in the 20th century. Instead of providing a survey, this study spotlights texts and historical moments key to understanding modernity. The first half of the book discusses German engagements with India in philological and philosophical writings. The second half juxtaposes disciplinary knowledge with artistic expressions in literature and cinema. The book is divided into 4 chapters, each one of them starts with a discussion of a “German” text and ends with a discussion of an “Indian” text. Through this multilayered analysis—spanning two centuries, several disciplines and multiple genres and media—the current study seeks to intervene in contemporary scholarship on modernity in the Humanities to bridge the gap between discussions of modernity and scholarship on colonialism and imperialism within German Studies.

B. Venkat Mani is Associate Professor, Department of German and faculty affiliate of the Center for German and European Studies, the Center for European Studies, Global Studies, Women’s Studies Research Center, and Program in Lesbian, Gay, Bisexual, and Transgender Studies at UW-Madison. Mani’s teaching and research interests include 19th and 20th century German and European literatures and philosophy. His work considers theories of multiculturalism, postcolonialism, migration, globalization, and cosmopolitanism. His publications include Cosmopolitical Claims: Turkish-German Literatures from Nadolny to Pamuk (University of Iowa Press, 2007). At the IRH he is working on his second book manuscript, Transposed Signs of Modernity, a study of German engagements with India.