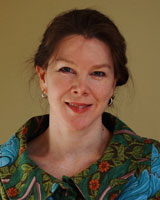 The Fleshly School: Matter in Books and Bodies in the Work of Dante Gabriel Rossetti

Marshall’s project takes a new angle Rossetti’s art by working from an interdisciplinary perspective, drawing on art history, the history of science, and literary studies, particularly the recent work on book history. These fields are especially useful for her consideration of Rossetti’s oeuvre in light of distinctively Victorian anxieties about the body and materiality. Investigating scholarship regarding the ways Victorians sought to tie down concepts and words into physical forms offers novel perspectives for interpreting painting, that much more troublingly physical medium. Uniting the findings of book historians, who consider the ways in which the physical attributes of text as published object create meaning, with those of art historians, who consider the materiality of pictures, this project hopes to illuminate Victorian middle-class definitions of matter and spirit.

Nancy Rose Marshall is an Associate Professor of Nineteenth-Century European Visual Culture in the Art History Department at the University of Wisconsin-Madison, focusing on Victorian Studies. Marshall, who earned her Ph.D. in the History of Art from Yale University in 1998, wrote a dissertation entitled, “‘Transcripts of Modern Life?’ The London Pictures of James Tissot 1871-1882,” part of which subsequently became a catalogue for a traveling exhibition originating at the Yale Center for British Art: James Tissot: Victorian Life / Modern Love. The Tissot project began an interest in realist representational modes and their intersection with modernity and the urban environment, resulting in City of Gold and Mud: Representing Victorian London (forthcoming from Yale University Press, 2010).