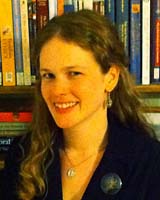 Love, Equanimity and the Cultivation of Moral Emotions

Emily McRae’s dissertation challenges the longstanding philosophical assumptions that emotions are out of our control and blind to moral value and offers solutions to some entrenched philosophical problems concerning emotional-ethical life, such as the proper roles for impartiality, partiality and passion. Drawing of the work of the Tibetan Buddhist thinker Patrul Rinpoche (1808-1887) and his student and commentator Khenpo (“Abbot”) Ngawang Pelzang (1879-1949), she presents an account of emotional-ethical life according to which a wide range of emotional experiences – from passionate feelings of love to feelings of equanimity – are valuable because they contain important moral insights.

Along with being an honorary fellow at the IRH, Emily McRae is also an American Association of University Women Dissertation Fellow (2010-2011). Her research is mainly in ethics and moral psychology, with a particular focus on comparisons between Western, Buddhist and Chinese moral philosophies. Her current work, which explores the emotional dimensions of moral self-development, focuses on how feelings love and equanimity transform our understanding of ourselves, others and moral life in general. She draws on Tibetan Buddhist thinkers to present an account of how these feelings are cultivated through personal relationships, especially friendship, and meditative practices. Emily’s essay comparing Tibetan Buddhist conceptions of equanimity and contemporary Western conceptions of impartiality won the Department of Philosophy’s Tempkin Prize for the best graduate essay in value theory. Her article on the moral psychology of the early Confucian philosopher Mengzi, entitled “The Cultivation of Moral Emotions and Mengzi’s Method of Extension,” is forthcoming in Philosophy East and West.