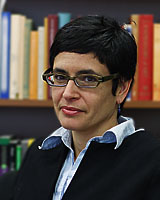 The New Woman Tries on Red: Russia in the American Feminist Imagination, 1905-1945

Both the “New Woman” and the “New Russia” were lenses through which Americans grappled with and understood the idea of the modern. These concepts were also mutually constitutive in the American imagination, seen simultaneously as subversive to the existing order and yet also deeply intriguing. Revolutionary Russia generated tremendous interest from outstanding figures of early twentieth century American feminism—and a larger group of female suffragists, artists, educators, social workers, journalists, and adventurers—informing their thinking and writing about love, work, citizenship, motherhood, creativity, and the ideal society.”The New Woman Tries on Red: Russia in the American Feminist Imagination, 1905-1945″ seeks to understand Russia’s place in the imagination and self-fashioning of financially independent, sexually liberated, and socially conscious American women, particularly in the 1920s and 1930s. While Soviet Russia’s violent history makes it an unlikely site for a “usable” feminist past, with historical distance and political disinterest from cold war paradigms that have informed much of the scholarship on U.S.-Russian relations, this work recovers the significant but forgotten “Russian chapter” in U.S. feminism.

Julia Mickenberg is Associate Professor of American Studies at the University of Texas at Austin and an affiliate of the Center for Women and Gender Studies, the Center for Russian and Eastern European Studies, and the Center for European Studies. She is the author of Learning from the Left: Children’s Literature, the Cold War, and Radical Politics in the United States (Oxford, 2006), which won several awards, and co-editor (with Philip Nel) of Tales for Little Rebels: A Collection of Radical Children’s Literature (NYU: 2008). In addition to the IRH project, she is currently co-editing the Oxford Handbook of Children’s Literature with Lynne Vallone. Mickenberg teaches courses on the 1960s, the 1930s, the Cold War, children’s literature, childhood studies, women’s history, and radicalism in the United States.