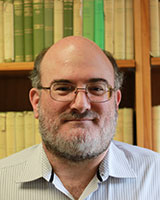 Milton will be using his time as a Solmsen Fellow to develop his second book project, Cultures of Debt: Christian, Muslim and Jewish Society in Iberia (1000-1500). This study will examine the complex nature of debt by considering the real factors of socio-economic life within the historical context of interreligious interaction during the later Middle Ages. It will explore how debt, obligation, and gift exchange made up a language of cross-cultural, cross-class relations which demanded negotiation and required variability between and among elite, commercial, and agrarian members of Iberia’s major religious communities. Medieval aristocratic and mercantile values clashed. Church and state authorities debated the moral regulation of economic exchange. Modern expectation often assumes that the contractual terms of debt must be met without exception, describing violations (real or assumed) with morally prescriptive language. The real language of debt, however, has delineated a range of activity and attitude for people, medieval or modern, with a fluidity often unrecognized. Debt – an economic act, social obligation, and moral question – connected people in medieval Iberia through an ever-shifting web of culture.

Gregory Milton has taught history at the University of South Florida, Marquette University, UCLA and the U.S. Naval Academy. His scholarship focuses on Europe and the Mediterranean during the Later Middle Ages, particularly the social effects of economic activity experienced by individuals and communities. His first book, Market Power: Lordship, Economy and Society in Medieval Catalonia (1276-1313) examined the development of the rural market town of Santa Coloma de Queralt, tracing the intersection of regional commercial interests, local lordship, and royal authority within the town’s market place. The regularity of commerce and credit in rural society for peasants and local nobility, along with the actions of Jews and Christians as enterprising businessmen, created complex economic, political, and cultural interactions across religious and social boundaries. Dr. Milton has published articles exploring the connection between religious identity and finance, about the transformation of written culture as notaries became professional scribes during the last quarter of the thirteenth century, as well as about the role of Jews as financiers in later medieval Iberia. A forthcoming article will address the marriage season of Santa Coloma as a combination of temporal and business activity in the formation of new rural households in Catalonia.