Address:
Lecturer in Art History, Theory, Criticism, at the School of the Art Institute of Chicago 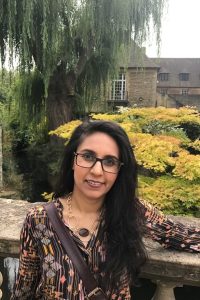 “Darshan and Disenchantment: Painting Worship in India, 1861-1947” examines paintings of Hindu temples and worshippers by British and Indian artists, focusing on the period between the establishment of the Archaeological Survey of India and the Indian fight for self-rule, or Swaraj. These paintings of historic sites of lived worship reveal overlapping and contrasting attitudes towards modernity, historicism, nationalism, and selfhood. They also provide an especially rich and hitherto overlooked ground for examining the convergences as well as the incommensurability between two modes of vision, one predicated on the pictorial demands of western modernity and the other on the Hindu concept of divine reciprocity of sight, or darshan. By focusing on these works, I hope to contribute to three distinct yet interconnected bodies of scholarship: the colonial history of architectural preservation, the role of Indian art as a form of anti-colonial activism, and the field of Indian aesthetics. By examining Indian and British images of temples and religious worship, I join scholars such as Parul Dave Mukherji in challenging the dichotomy between Western materialism and Indian transcendentalism that continues to impact the study of Indian art since the 1920s. At the same time, my study reveals the disjunctions and incongruities that are revealed when radically divergent art objects, ideas, or practices are brought into dialogue.

Aisha Motlani is a senior researcher at Arts Alliance Illinois and a part time lecturer at the School of the Art Institute of Chicago. Her research and teaching focuses on the visual culture of colonialism, with an emphasis on the technologies and practices through which Britain experienced, understood, collected, and controlled its Indian empire. Her PhD dissertation examined visual representations of the 1857 Indian Rebellion across a variety of media, including painting, print, and photography. Her current research emphasizes the entwined histories of architectural preservation, colonial aesthetics, and religious experience in India circa 1860-1947 and is supported by the American Council of Learned Societies.