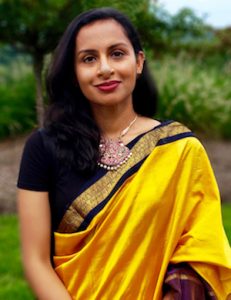 The State of the Individual: Biometrics, Politics, and the Common Man in India

Dr. Nair’s current research concerns the social, cultural, political and legal meanings that have accrued to the world’s largest national biometric ID system. Inaugurated in 2009, India’s Aadhaar (literally “foundation”) initiative has issued unique twelve-digit identification numbers to over one billion Indian residents. The Aadhaar ID is linked to an individual’s iris scans, fingerprints, facial photograph, and select demographic information in a central database. Its architects averred that this ID system would be an unassailable solution to a key problem facing the country: namely, a majority of the population lacking incontrovertible formal proof of individual identity that might afford easy access to a range of government and private sector services. Aadhaar was also forwarded as an effective means to root out “fake,” “duplicate” and “ghost” identities typically used to defraud the sprawling state welfare system. Relying on biometric technologies to glean the “true” identity of individuals, it would facilitate real-time identity verification, make misappropriation virtually impossible, and insure that welfare reached its intended recipient. Officials argued that in a vast, diverse and socioeconomically stratified country like India, Aadhaar would be a universal, inclusive identification platform with potentially endless applications in business and government. Nair’s book manuscript, The State of the Individual: Biometrics, Politics and the Common Man in India [working title], is based on fieldwork among bureaucrats, technocrats, enrollment operators, technical personnel and enrollees. It follows the planning and implementation of Aadhaar, as well as official attempts to re-haul India’s welfare delivery mechanisms using this new identification system. While Aadhaar is officially presented as a technology that circumvents human vagaries and inexactitude, Nair’s work concentrates on the ways in which it serves as a dynamic site for both material and moral inventiveness. Her manuscript focuses on the multifarious negotiations, everyday meaning-making, pedagogies, and improvisations that lie behind the technological edifice of Aadhaar. The State of the Individual probes legal challenges to Aadhaar, and studies its imbrications with electoral politics and the popular media. Ultimately, Nair’s project offers an analysis of Aadhaar as a site for reimagining the state, the aam aadmi (common man), and the relationship between them in contemporary India.

Nair is a is a sociocultural anthropologist interested in the interconnected realms of the state, politics, new governance technologies, ethics and personhood in South Asia and, more recently, China. She received her PhD in Anthropology from New York University and an MPhil in Social Anthropological Analysis from the University of Cambridge. Nair also holds an MA in Sociology from the Delhi School of Economics for which she received the University Gold Medal. Her First Class BA Honours degree in Philosophy is from St. Stephen’s College, Delhi University. The National Science Foundation and the Social Science Research Council, among others, have supported Nair’s research. Nair’s UW-Madison Mellon Postdoctoral Fellowship is complemented by a China India Scholar-Leaders Fellowship at the India China Institute, The New School.