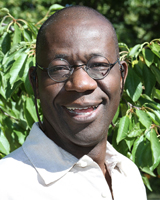 Enchanting Modernity: A Cultural Biography of the Postcolonial African State

At the Institute, Olaniyan is researching how the postcolonial African State is portrayed or embodied in both popular and elite cultural forms and practices such as literature, political cartooning, music, urban architecture, voluntary associations, bureaucracy, etc, and how the nature of the State impacts the emergence and evolution of those forms and practices. His goal is to compose a cultural biography of the postcolonial African State in order to advance the epistemological processes of understanding it, and thereby contribute to resolving its social crisis.

Tejumola Olaniyan, IRH Senior Fellow, is the Louise Durham Mead Professor of English and African Languages at the University of Wisconsin-Madison. He is founding chair of the African Diaspora and the Atlantic World Research Circle (2003-2010), and currently co-chairs the Music, Race, and Empire Research Circle. His research interests include African, African diaspora, and postcolonial literature and cultural studies. He has published widely in these areas, including Arrest the Music!: Fela and His Rebel Art and Politics (2004, 2009; nominated for Best Research in World Music by the Association for Recorded Sound Collections in 2005), Scars of Conquest/Masks of Resistance: The Invention of Cultural Identities in African, African American and Caribbean Drama (1995), and co-editor of African Literature: An Anthology of Criticism and Theory (2007, with Ato Quayson), African Drama and Performance (2004, with John Conteh-Morgan), and African Diaspora and the Disciplines (2010, with James H. Sweet). One of his current projects is a book, Political Cartooning in Africa, forthcoming from Indiana University Press, and an online encyclopedia of African political cartoonists.