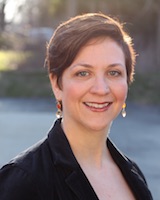 By examining the bodies of women as they conceive, miscarry, give birth, and lactate in Anglo-Saxon texts that are medical, legal, religious, historical, and literary, I show that the policing of these bodies contradictorily highlights the authority of women over both body and progeny. By placing genres of texts that rarely speak to one another in conversation, I offer a fuller vision of the experience of maternity. Despite the fact that the monastic literary tradition only rarely offers representations of women, the variety of genres examined here allow us to see past exceptional women by examining the corporeal experience of maternity. I reveal that women sought to control the reproductive processes of their bodies, knowing full well the dangers of doing so, and that they used their maternal labors as a means of self-authorization.

Dana Oswald is author of the book Monsters, Gender, and Sexuality in Medieval English Literature, as well as articles on Old and Middle English literature and translation, and gender and sexuality studies. Her focus on the embodied experience of life in medieval England is a means by which contemporary readers can connect to people, characters, and problems existing in an age that can seem very foreign.