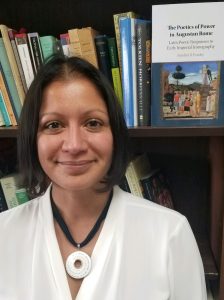 Diversity and Difference in Ancient Rome

While Greco-Roman attitudes toward specific foreign peoples have been well studied, nobody has yet explored how the Romans conceptualized ethnic difference within their own communities. This book project opens up new evidence for race relations in antiquity by exploring the discursive and topographical spaces in which the Romans imagined and negotiated ethnic variety. This multidisciplinary analysis of words, images, and historical evidence regarding ethnic pluralism in the Roman empire writes a new chapter in the history of Western thought on race and ethnicity. By tracing historical complicities between imperialism, consumerism, and the valuation of diversity, this study also hopes to encourage critical reanalysis of modern discourses and practice surrounding diversity.

Nandini B. Pandey is an associate professor of classics at the University of Wisconsin-Madison, with degrees in Latin, Greek, Classics, and English from Swarthmore, Oxford, Berkeley, and Cambridge. Her first book, The Poetics of Power in Augustan Rome, came out in 2018 with Cambridge University Press, and she is grateful for research leave in 2019-2020 from the IRH and the American Council of Learned Societies (ACLS) for her second book project on Roman diversity. She has published numerous articles on subjects from Vergil’s Underworld to Roman women’s hair to Jacobean revenge tragedy in traditional journals like Transactions of the American Philological Association and Classical Philology, and she also writes regularly on classics and contemporary culture for the online magazine Eidolon. In her free time, she enjoys travel, scuba diving, and classic cocktails.