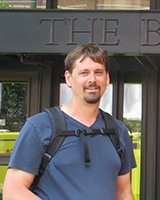 My dissertation examines the historical role played by Islamic charitable endowments in Swahili cities during the late precolonial to early colonial period (roughly late 1700s to early 1900s). Specifically following the development of wakf (Islamic endowments) in the burgeoning capitol port of Zanzibar and its cosmopolitan competitor Mombasa, my research argues that over time inhabitants of Swahili towns articulated notions of charity both deeply rooted in African social discourse but also responsive to a variety of trans-oceanic strains of Islamic morality. These intersections demonstrate how centrally charitable behavior was inscribed upon Swahili ideas about moral citizenship in their world and how they imagined the topography of the city in moral terms. Tracing the changes ushered in by successive Omani and British regimes also challenges the problematic ways modern historiography has linked the western notion of caritas with philanthropy, which effectively envisions charity as a modern concept. Rather, my project opens up the possibilities of investigating African altruism prior to European intervention.

Stephen Pierce is a Ph.D. candidate in the Department of History at UW-Madison. His research explores the historical development of Islamic institutions of charity, especially along the East African coast, but also focuses on how cosmopolitanism, the multiple trajectories of Islam among its many adherents, and the intersection of culture and religion with these histories challenge traditional definitions of charity and philanthropy. His doctoral work has been funded by a Mellon-Fulbright Doctoral Dissertation Research Fellowship, a UW-Mellon Summer Dissertation Fellowship, a UW Chancellor’s Fellowship and the Dana-Allen Doctoral Dissertation Fellowship. He received a B.A. in history and social studies from Cedarville University and an M.A. in world history from Northeastern University in Boston. He is at work on a dissertation entitled “Charity, Cosmopolitanism and Culture in coastal East Africa, 1750s to 1940s.”