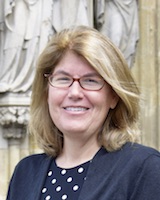 Stripping the Veil: The Protestant Nun and Experiments in Coexistence in Early Modern Germany

Differences between religious groups coexisting in the same nation remain one of the thorniest sources of controversy and violence in many regions of the world. The vital role of women in creating means of transmitting religious identity and arbitrating differences has been often noted. Beth’s book project examines how nuns of diverse confessional beliefs shaped their devotional lives and negotiated their everyday lives in non-coreligious monastic, parish, and political communities after the early German Reformation (c.1520-c.1745). The overlooked presence of Protestant nuns in the Holy Roman Empire is evidence of a more complex lived experience of religious change and confessional accommodation than traditional histories of early modern Christianity would indicate. Her research questions focus on the fluidity of devotional lives of these women, the interplay between peaceful and violent resolution of religious differences, and the role these women played in shaping official and popular attitudes towards religious freedom.

Beth Plummer is Professor of History at Western Kentucky University. Her research focuses on the impact of the reform movement on family, gender roles, and religious identity in early modern Germany. Her publications include From Priest’s Whore to Pastor’s Wife: Clerical Marriage and the Process of Reform in the Early German Reformation (Ashgate, 2012), which won 2013 SCSC Gerald Strauss Book Prize, and articles on monastic marriage, concubinage, bigamy, historical memory, and Protestant nuns. She is also co-editor of Ideas and Cultural Margins in Early Modern Germany: Essays in Honor of H.C. Erik Midelfort (Ashgate, 2009) and Archaeologies of Confession: Writing the German Reformations, 1517-2017 (forthcoming). She is currently working on a book-length monograph on the experience of nuns and former nuns during the dissolution and reform of monastic life in early modern Germany.