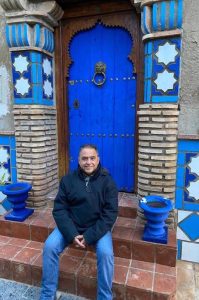 Literature of (With, By, For, and With Regard To) The Moriscos

To establish an interpretative paradigm that can fully encompass the figure of the Morisco in Spanish Literature and can assess the cultural importance of the Morisco is still a challenge. An artificial Morisco was built by Christians as a figure whose identity must be exterminated by Spanish authorities. This provoked a conflicting path that removed the Moriscos from Spanish society to place them in the imaginary of irrationality and treason. Literature on the Moriscos is then a literature on the limits of identity, with a complex and still unsolved paradox, the uncomfortable presence of Spanish people but rejected as such Spaniards.

Luis F. Bernabé Pons is Professor of Arabic and Islamic Studies (University of Alicante). He has been Visiting Professor at the Universities of Algiers and Tunis, DAAD-Stipendiat at the Universität Bielefeld, Chercheur invité at the École des Hautes Etudes en Sciences Sociales in Paris, Norman McColl Lecturer at the University of Cambridge, and Visiting Scholar at UW–Madison. Director of the Journal Sharq Al-Andalus. Estudios Mudéjares y Moriscos and Section Editor (Iberia) of Christian-Muslim Relations. An Annotated Bibliography (Leiden: Brill). He has devoted most of his work to the cultural and religious life of Muslims living under Christian Rule (Mudejars and Moriscos), both in Spain and in North Africa. He has also published several works on religious conversion, religious polemic, Islamic hidden heritage in Spain, the image of Islam in the West, Spanish heritage in Algiers and Tunis, Arabic toponymy, and Arabic and Spanish Literature.