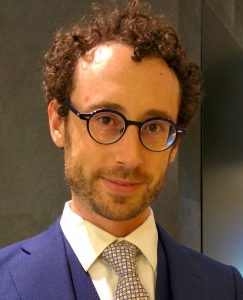 The Four Great Inventions: A Global History of Modern China

The narrative that the “four great inventions” of ancient China – paper, printing, gunpowder, and the compass – changed the world, has been one of the most recognized tropes about China since the 16th century. Surprisingly, this narrative originated in Renaissance Europe and only migrated to China in the twentieth century, where it became a subject of national, racial pride. This dissertation tracks the great inventions narrative from Renaissance Europe to modern China, showing how it enabled everyone from Francis Bacon to Chairman Mao to proclaim science and technology a central force in history, and therefore, the keys to national wealth and power.

Galen Poor is a Ph.D. candidate in Chinese History and the History of Science at UW-Madison.  His research spans from Renaissance Europe to modern China, reflecting on technology, modernity, and the transnational origins of China’s national narratives. His dissertation, The Four Great Inventions: A Global History of Modern China, shows how the history of technology became a powerful narrative defining China’s place in the modern world. Galen has presented his work at the History of Science Society Annual Meeting, the Midwest Conference for Asian Affairs, and many colloquiums at UW-Madison and Tsinghua University. Galen has served as a teaching assistant for courses on Asian history, and the history of science and technology. Galen is a Dana-Allen Fellow at the Institute for Research in the Humanities. He received his B.A. in History from the University of Wisconsin-Madison, and his M.A. in Asian Studies from the University of Victoria.