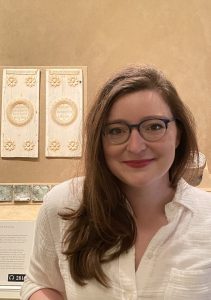 “One Whose Name was Writ in Wax:” Reflections on the Medieval Reuse of Consular Diptychs

My project considers the medieval reuse of a group of Late Antique Roman ivories known as consular diptychs. Existing today in some fifty examples dated ca. 400–540 C.E, these pairs of hinged tablets, which often bear double portraits of the new consul on their exterior surfaces, front and back, have attracted scholarly interest primarily as instruments of Roman administration and as documents of stylistic development in Late Antiquity. Almost entirely ignored is the fact that the interiors of many ivory diptychs bear medieval texts, musical notation, and images. I argue that, as honorific Roman objects repurposed in the Christian liturgy, these diptychs testify to local concerns of family and community identity and the legitimacy of rulership across Afro-Eurasia, especially surrounding the commemoration of the dead. The ubiquity of writing tablets, some of which were reused as insets in book covers, and parallel liturgical and monastic uses for early medieval manuscripts, also sheds light on the development of the codex.

Nicole Pulichene is the Robert M. Kingdon Fellow at the Institute for Research in the Humanities at the University of Wisconsin–Madison. Her new book project, “‘One Whose Name was Writ in Wax’: Reflections on the Medieval Reuse of Consular Diptychs,” focuses on the connection between early Christian liturgical rites and the medieval reuse of late antique ivory diptychs. Previously, she served as the Andrew W. Mellon Curatorial Research/Collections Specialist Fellow and was a member of the Medieval Ivory Research Project in the Department of Medieval Art and The Cloisters at The Metropolitan Museum of Art. She is co-editor and contributing author to the monograph The Boethius Diptych: New Findings in Technical Art History, Iconography, and Paleography (Passau: Dietmar Klinger Verlag, 2021). She completed her PhD at Harvard University in 2020 in the Department of the History of Art and Architecture. With the support of predoctoral fellowships from the Samuel H. Kress Foundation and the Deutscher Akademischer Austauschdienst, she was in residence at the Zentralinstitut für Kunstgeschichte in Munich from 2016–2020. Her research has been supported by the Medieval Academy of America, the International Center of Medieval Art, and La Société Internationale des Médiévistes de Paris.