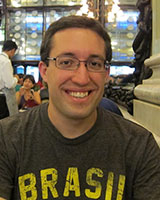 This project explores how seemingly benign images shaped the contested ideals of cultural hegemony and resistance that motivated slave rebellions in the Atlantic world. During the crisis launched by a wave of rebellions in the Brazilian province of Bahia, Portuguese cartographers, European travelers, and enslaved and free Africans utilized media as diverse as cartography, travel illustrations, and religious assemblages as weapons in a battle for social control. Departing from a history of analyzing the visual culture of Brazilian slavery as a documentary source, this project argues that Bahia’s slave rebellions were motivated and waged through the politics of visual representation.

Matthew Francis Rarey is a Dana-Allen Dissertation Fellow and Ph.D. candidate in the Department of Art History at the University of Wisconsin-Madison. Always eager to foster transdisciplinary collaborations and collisions, Rarey also maintains active affiliations with the African Studies Program, the Center for Visual Cultures, the Latin American, Caribbean, and Iberian Studies Program, and the McPherson Eye Research Institute. Rarey’s research, teaching, and writing broadly span the history and theory of visuality and performativity in the black Atlantic world. His work has appeared in Theorizing Visual Studies: Writing Through the Discipline (Routledge, 2012) and is forthcoming in African Heritage and the Memory of Slavery in Brazil and the South Atlantic World (Cambria Press) and Romantic Circles Praxis Series. Rarey’s current dissertation project has garnered wide support, including the 2010 Joaquim Nabuco Award from the UW Brazil Initiative; the 2011 James R. Scobie Memorial Award from the Conference on Latin American History; a 2011 UW-Madison Chancellor’s Fellowship; and a 2012-2013 CLIR Mellon Fellowship for Dissertation Research in Original Sources.