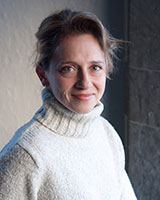 The American Ways of Wisdom and Wonder: Seeking the Good Life in the 20th-Century United States

What would the writing of American intellectual history look like if it sought to capture the longing for wisdom and wonder shaping so much of its intellectual life? This is the question animating my book project on the history of “philosophy” (the love of wisdom) as it took on manifold forms in the 20th-century U.S. It traces the history of this yearning as it moved beyond disciplinary philosophy to other academic fields, from the academy to popular culture (and back), and from formal religion to “spirituality.”

Jennifer Ratner-Rosenhagen is the Merle Curti Associate Professor of History at University of Wisconsin-Madison. Her research examines U.S. intellectual and cultural history, with a focus on the transatlantic flow of ideas and cultural movements. She is the author of American Nietzsche: A History of an Icon and His Ideas (University of Chicago Press, 2012), which is the recipient of the Society for U.S. Intellectual History’s first annual prize for the best book in U.S. Intellectual History and the 2012 Morris D. Forkosch Prize for the best book in intellectual history. In addition to her scholarly articles, she has written essays and reviews for The Wilson Quarterly, Daedalus, The American Prospect, and the Guardian blog. She is currently working on a book on the search for wisdom and wonder in 20th-century American life.