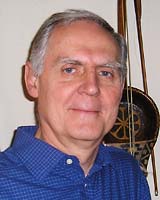 Taking Milman Parry’s comparative work on South Slavic and Homeric epic poetry as its point of departure, the project is focused on the question of what it means for epics to be performed, transmitted and composed orally. Rather than on South Slavic oral poetry, the project is based on thirty years of field-work among the Turkic-speaking peoples of Central Asia. The study of their oral epics sheds new light on the aesthetics of oral poetry, on the tension between functionality and ‘art’, as well as on the crucial role the singer or bearer of tradition plays in an oral society. Within a comparative framework, these insights also contribute to a better understanding of medieval epics with an oral background.

Karl Reichl is Carl Schurz Memorial Professor at the University of Wisconsin-Madison for the spring semester of 2011 and Professor Emeritus of the University of Bonn. As a medievalist he has been teaching in the English Department of the University of Bonn but as visiting professor also in departments of comparative literature and Oriental/ Near-Eastern studies. His main reseach interests lie in medieval oral literature and in contemporary (or near-contemporary) oral epic poetry in Turkey and in the Turkic-speaking areas of Central Asia. His publications include: Turkic Oral Epic Poetry: Traditions, Forms, Poetic Structure, New York, 1992 (translated into Turkish, Russian and Chinese); Singing the Past: Turkic and Medieval Heroic Poetry, Ithaca, NY, 2000; Edige: A Karakalpak Oral Epic as Performed by Jumabay Bazarov, FF Communications 293, Helsinki, 2007. Forthcoming is a handbook (in English) in the ‘de Gruyter Lexikon’ series: Medieval Oral Literature, ed. K. Reichl, Berlin, New York: de Gruyter.