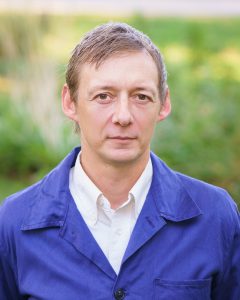 This research project examines cultural production surrounding three monuments to post-WWII Japanese aspiration: Tokyo Tower (1958), Expo 70’s Tower of the Sun (1970), and Tokyo Sky Tree (2012). My methodology is cultural studies with particular emphasis on sources from literature and visual culture. More specifically, by leveraging theoretical insights on affect, kitsch, and camp, I hope to triangulate the Japanese valence of postwar cultural irony in response to the towers as expressed in “kitchu”—a term theorized by the art critic Ishiko Junzō as strategic reappropriation of design, but strategic to what end?

Steve Ridgely is associate professor of modern Japanese literature at the University of Wisconsin-Madison and author of Japanese Counterculture: The Antiestablishment Art of Terayama Shūji (Minnesota, 2010). He has also written on the use of cinema in fiction by Tanizaki Jun’ichrō, Expo 70 and midcentury Japanese futurism, Yokoo Tadanori and commercialized art, and contemporary Japanese fairy tales. He recently completed book manuscript on the diffusion of theoretical mathematics through literature, music, and critical theory in 20th century Japan, looking in particular at the discourse on topology.