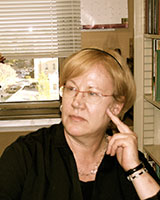 City of Disquiet: Imagining Lisbon at the End of the 20th Century

In my current book on visual and literary representations of Lisbon, Portugal, during the late 20th and early 21st centuries, I approach the city as built-environment and analyze how changes to the urban fabric have been reflected in literary and visual representations of urban experience. Exploring how artists, photographers, filmmakers, and writers have used their work to register the city’s various transformations since the transition to democracy in the mid-1970s, I ask whether polarization has become exacerbated, both physically and politically, in contemporary, post-imperial Lisbon. Drawing inspiration from the modernist writer Fernando Pessoa’s Book of Disquiet, that was published posthumously in 1982, my point of departure lies in an examination of the quotidian routines of the Portuguese capital; like Pessoa’s “false diary,” my project also aims to register the frustrations, dreams, and flights of the imagination that arise from the experience of the city.

Ellen Sapega is a Professor in the Department of Spanish & Portuguese and the Director of the Center for European Studies. She specializes in 20th century Portuguese literature and culture and has published widely on topics related to Fernando Pessoa, Mário de Sá-Carneiro, memory, visual culture and commemoration since the late 19th century, the contemporary Portuguese novel, and 20th century Cape Verdean literature and culture. Sapega is the author of Ficções Modernistas: Um Estudo da Obra em Prosa de José de Almada Negreiros (Lisboa: Instituto de Cultura e Língua Portuguesa) and Consensus and Debate in Salazar’s Portugal: Visual and Literary Negotiations of the National Text (Penn State UP). For many years, she was a co-editor of the Luso-Brazilian Review.