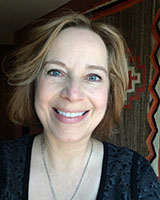 In the eleventh through sixteenth centuries AD, the midcontinental and southeastern United States was the scene of considerable population movement as premodern indigenous peoples of disparate backgrounds, collectively called Mississippian by archaeologists, abandoned their homes and agricultural fields and migrated, sometimes great distances, to join together and form new communities in new places or move into existing towns in foreign areas. In seeking to understand how people successfully formed these multi-ethnic communities, I focus on architectural practices, particularly the ways in which aesthetics and symbolism of the built environment connect with the social, political, and cosmological processes that shaped these communities.

Sissel Schroeder is a Professor of Archaeology in the Anthropology Department at UW-Madison. Her research intersects with the humanities, social sciences, and physical and biological sciences, and includes the investigation of ancient architecture, ecological and agency-based considerations of emerging sociopolitical complexity, historical ecology, and the history of archaeology. Her research has been published in edited volumes and journals, including the American Antiquity, Journal of Anthropological Archaeology, Antiquity, Southeastern Archaeology, Journal of Biogeography, and Proceedings of the National Academy of Sciences. She is a recipient of the Chancellor’s Distinguished Teaching Award, and served as the Director of the College of Letters & Science Honors Program in 2012-2015. She is at work on a project entitled “Building Place and People: Materiality, Hybridity, and Community Formation among Ancient Native Americans in the Midcontinent, AD 1000-1600.”