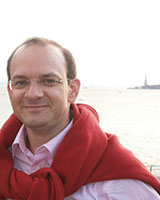 The Translation of Foreign Religion in Herodotus

In my book project on the translation of foreign religion in Herodotus’ Histories, I deal with narratives about foreign peoples, cultures, and their religions, that – in Antiquity as well as today – have been delicate subjects. At the intersection of Classical Studies, Ancient History, and Religious Studies, my investigation explores Herodotus’ narratives about foreign religions in the Histories in order to reconstruct his method of describing and understanding foreign religions. The close, systematic analysis of Herodotus’ narratives on Egypt and Persia will be directed by a multidimensional concept of ‘religion’ and by key questions raised by scholarship of the modern studies of religion (e.g. aesthetics, psychology and sociology of religion).

Andreas Schwab is an Assistant Professor of Classics at the Ruprecht-Karls-University of Heidelberg in Germany. He published his first book on the sophisticated Late Antique (4th cent. CE) hexameter poetry and theology of Gregory of Nazianzus, Peri Pronoias On Providence: Text, Translation and Commentary, Classica Monacensia series (Tübingen 2009). In his second book, Thales of Miletus in Early Christian Literature, Studia Praesocratica series (Berlin/Boston 2012), he focuses on the reception of this early Greek philosopher, astronomer and sage of the 6th century BCE. He has written articles on the hermeneutics and the reception of ancient Greek philosophy, Herodotus, the Homeric Hymn to Demeter, and early Christian literature. In 2015 he co-edited a volume entitled Le Travail du Savoir / Wissensbewätigung: Philosophie, sciences exactes et sciences appliquées dans l’Antiquité. He is also a co-editor of The Reception of the Homeric Hymns (Oxford University Press, forthcoming). His current book project is on “The Translation of Foreign Religion in Herodotus.”