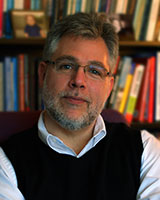 Meaning and the Good Life

Shafer-Landau’s IRH project intends to explore the philosophical issues surrounding the good life and the meaning of life. The central questions he will pursue are these: what makes for a good human life? What role does happiness and desire-satisfaction play in human welfare? How should we understand what people are asking about when they inquire about life’s meaning? What are the essential elements in a meaningful life? What are the links between living a good life and a meaningful one?