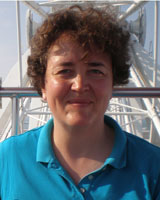 Modernism as Archaism: Nationalism and the Quest for a Modernist Aesthetic in Russia

In this book-length study, I investigate the encounter of Modernist aesthetic agendas with the process of nationalist indoctrination in late Imperial Russia. I discuss the proliferation of archaizing aesthetics among Modernist artistic media (literature, art, music) as a fact of Russian intellectual history, focusing on the analysis of discursive strategies employed by artists and critics to justify “nationally-minded” aesthetic programs. I will argue that various versions of an archaizing aesthetic in a nationalist key emerged in Russian Modernism as a means to construct an alternative “modern” aesthetic paradigm that would not look dependent on an “alien,” westernized, cultural heritage, and that the resulting trend of cultural constructivism had lasting significance for modern Russian culture.

Irina Shevelenko (BA/MA, University of Tartu, Estonia; MA, PhD, Stanford University) is Assistant Professor of Russian Literature at UW-Madison. Her primary area of research is Russian Modernism. She is the author of a book on a major twentieth-century Russian poet Marina Tsvetaeva, Tsvetaeva’s Literary Path: Author’s Ideology, Poetics, and Identity in the Context of Epoch (2002, in Russian; new, revised, edition forthcoming in 2012) and a scholarly editor of several critical editions of archival sources, among which are Tsvetaeva’s notebooks (1997) and her correspondence with Boris Pasternak (2004); the latter edition earned a diploma of the Russian State Agency for Archives. Shevelenko’s initial research for her current project was generously funded in 2005-2007 by the Alexander von Humboldt Foundation, Germany; she has published several articles related to it, and she currently works on the book manuscript.