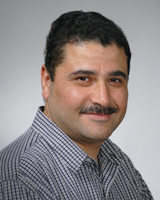 The Sliver of the Oxus Borderland: Medieval Cultural Encounters between the Arabs and Persians

How do physical borders and boundaries delineate the nature of cultural interactions and determine the development of historical time and place? What are the kinds of spaces created alongside borders that promote inclusive permeability versus boundaries that generate exclusive separation? Critical biographies of borderlands – the conditions created by these borders and boundaries – are evocative biographies of no places and the people who no longer live there. Yet, these biographies are seldom recorded in scholarly writings even though the passage of history through these so-called spatial ‘edges’ frequently leaves behind a rich palimpsest of cultural records. Extending upon Kevin Lynch’s emphasis on ‘edges’ and Richard Sennett’s fascinating distinction between a boundary that divides, versus a border that serves a place of exchange, this ongoing book project examines one such unique borderland condition on the legendary Silk Road, located on Central Asia’s important Oxus River. Combining a close reading of archival sources spread across repositories in the Russian Federation, Uzbekistan and Turkmenistan, with several years of innovative fieldwork, it seeks to unravel how conflict, reconciliation and interaction between medieval Arab and Persian communities created unique urban forms alongside this geographically significant and politically critical divide.