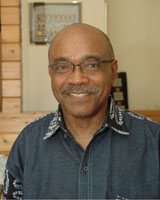 ‘Calabash Cinema’: Representations of the Indigenous in Francophone African Films

This project investigates (mis)representations of race and indigeneity and the attendant exclusion of the indigenous other in cinematic narratives of “the Nation” in Francophone Africa. It seeks to understand the roots and pervasiveness of misrepresentations of indigenous peoples of Africa dating back to the invention of cinema in France (1895); to assess the efficacy of the counter-discourses initiated by early African filmmakers from the 1960s on to portray the same indigenous peoples in a more acceptable light for the purpose of nurturing the ideology of nationhood; and to explore the reasons behind—and the impact of—the paradoxical failure of the latter filmmakers to connect with their intended audiences, thus perpetuating their exclusion from this critical cultural expression of modernity that purports to promote nationhood.

Aliko Songolo is Halverson-Bascom Professor of French and Professor of African Languages and Literature at the University of Wisconsin-Madison. His research and teaching interests lie primarily in Francophone literatures of Africa and the Caribbean, and Francophone cinemas of Africa and Québec. He has published a monograph (Aimé Césaire: une poétique de la découverte, 1985), two co-edited volumes (Twenty-five Years After Dakar and Fourah Bay: The Growth of African Literature, 1998, and Atlantic Cross-Currents/Transatlantiques, 2001), and was Associate Editor of the highly acclaimed five-volume New Encyclopedia of Africa (2008). He also edited special issues of two eminent journals in his field, French Review (1982) and Présence Francophone (2003), and published numerous articles. His current research projects investigate the question of national cinema in Québec and Francophone Africa, and postcoloniality in the wake of the Négritude movement. He was named Chevalier dans l’Ordre des Palmes Académiques (Knight in the Order of Academic Palms) by the French Ministry of National Education in 2008. He has served as Chair of the Department of French & Italian, as Director of the African Studies Program at the University of Wisconsin-Madison, and as Associate Vice-Chancellor of Academic Affairs at the University of California-Irvine before his move to Wisconsin.