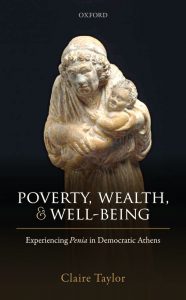 A Feminist Economic History of the Ancient Greek World

This project explores the ancient Greek economy through a feminist lens by drawing on feminist economics and gender studies literature. Traditionally work on ancient economies has downplayed the social roles and actions of women but here I will more fully embed women (of all classes) as active agents into discussions of economic processes and phenomena. The project therefore examines how aspects of ancient economies are shaped by—and shape—the social construction of gender, examines the relationship between inequality and the structures and processes of ancient economies, and views women’s lives as being central to, rather than marginalized in, debates about ancient economies.

Claire Taylor is Associate Professor and John W. and Jeanne M. Rowe Chair of Ancient Greek History at UW-Madison. She is the author of Wealth, Poverty, and Well-Being: Experiencing Penia in Democratic Athens (2017), co-editor (with Kostas Vlassopoulos) of Communities and Networks in the Ancient Greek World (2015) and (with J.A. Baird) of Ancient Graffiti in Context (2011) as well as a number of articles. She has held fellowships at the University of Manchester in the UK, the Center for Hellenic Studies in Washington DC, and, most recently, the University of Münster in Germany.