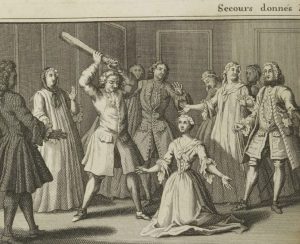 Convulsive Enlightenment: Lives and Afterlives of the Convulsionnaires in French Culture and Theory (18th to 21st Centuries)

Convulsive Enlightenment retells the story of the Jansenist Convulsionaries, an extreme but influential fringe group of a dissident reform movement within Catholicism. This group first took shape in 1727 around the tomb of the recently deceased deacon François de Pâris, an objector to the repressive Unigenitus Bull (1713), which had condemned Jansenism as heretical. To demonstrate the injustice of that Bull, the embattled state of the “true” Church, and the thaumaturgic powers of the late Pâris, the Convulsionaries carried out spectacular expressions of faith in the form of ecstatic convulsions, symbolic figurism, apocalyptic prophecies, and extreme mortifications that involved beating, stabbing, burning, and even crucifixion. Convulsive Enlightenment studies the Convulsionaries from two angles: the context in which they arose and developed in eighteenth-century France, and their long-term heritage as touchstones in French and Francophone culture, theory, and aesthetics. One of the book’s aims is to examine the essential tension between the Convulsionary movement and the Enlightenment, while also considering competing narratives of the Convulsionaries in religious discourse, medicine, literature, and social commentary. It also reconstructs the ways in which the Convulsionaries became the stuff of myth-making, as later theorists created imagined relationships between the behavior of this group and a wide range of phenomena–including mesmerism, voodoo, hypnosis, hysteria, the delusions of crowds, ʿIssāwa Sufism, surrealism, frenetic performance styles, and the decentered self.

Anne Vila is Professor of French at UW-Madison. She received her Ph.D. from Johns Hopkins University and has held visiting appointments at Emory University and Stanford University along with a fellowship from the National Endowment for the Humanities. She is the author of Enlightenment and Pathology: Sensibility in the Literature and Medicine of Eighteenth-Century France (1998) and Suffering Scholars: Pathologies of the Intellectual in Enlightenment France (2018), and the editor or co-editor of several volumes, including A Cultural History of the Senses in the Age of Enlightenment (2014) and (with Ronan Chalmin) a critical reedition of Samuel-Auguste Tissot’s De la santé des gens de lettres (2018). Her main areas of research are eighteenth-century French literature, intellectual history, and the medical humanities. She is particularly interested in the conceptual transfers that certain key ideas or social phenomena have created between literature, medicine, and the “human sciences” from the eighteenth century to the present day.