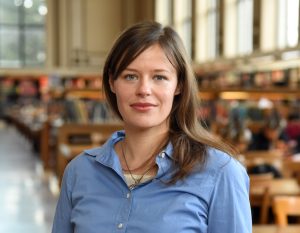 Evolution in Times of Revolution: Darwinism, Nature, and Society in the Soviet Union

“Evolution in Times of Revolution” examines debates surrounding Darwinian evolutionary theory in late Imperial Russia and the Soviet Union. These debates offer a lens through which to analyze conceptions of nature and the interplay of science and ideology in twentieth-century Russia. While the Tsarist government viewed Darwinism with trepidation and understood it to be linked to atheism and revolution, the Bolshevik revolutionaries embraced it for these very reasons. Yet to Bolsheviks, too, Darwinism posed important problems: although they considered Darwinism a cornerstone of their revolutionary worldview, Soviet scientists and ideologues struggled to reconcile Darwin’s gradualist theory of evolution that decentered humankind with their Marxist theory of revolution. The setting is the Moscow Darwin Museum, founded in 1907. This hub of Darwinian research was home to scientists, environmentalists, artists, and popularizers of science—the subjects of this study. Scholars linked to the museum invoked Darwin but diverged from key aspects of his theory. They criticized Darwin for the insight that evolution develops gradually, rather than in leaps or revolutions, and upheld an anthropocentric worldview that aligned with the Bolsheviks’ aspirations of mastering nature. Far from a purely theoretical debate on evolution and nature, the researchers and their conclusions informed the formulation of real-world Soviet environmental policies, such as measures to protect endangered species.

Mirjam Voerkelius received her Ph.D. in Late Modern European History with a focus on Russian and Soviet history from the University of California at Berkeley in December 2018. Her dissertation on the reception of Darwinism in late Imperial and Soviet Russia has received funding from UC Berkeley, the German Academic Exchange Service, the Doris G. Quinn Foundation, and the Max Planck Insitute for History of Science. The project, which explores how researchers and ideologues sought to reconcile Darwin’s theory of evolution with Soviet revolutionary ideology, is based on archival research conducted in Russia, the US, and her native Germany. During her stay at the Institute for Research in the Humanities, Mirjam will work on the manuscript of her book project. She is also working on an article on the Soviet search for the Abominable Snowman and the light this elusive human-like ape creature sheds on the nature of the human-animal boundary in Soviet thought.