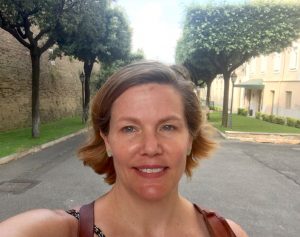 What Price Souls: Race and Religion from the Mediterranean to the Atlantic and Naming Race in the Renaissance

Africans. Highlighting the distinctions between Catholic and Protestant approaches to evangelization and enslavement at a formative phase in the Transatlantic slave trade, What Price Souls traces the world-historical repercussions of these differences. Naming Race in the Renaissance uses early modern Italian print sources from the fourteenth through the sixteenth centuries to resituate the concept of ‘race’ in its originary European and early modern intellectual milieu. Examining the intersecting social practices and Christian-classical ontologies which engendered usages of ‘race’ along with key contexts and meanings, Naming Race shows how this polemical concept arose independently of Iberian purity-of-blood statutes and well before Transatlantic slaving and colonialism reached full swing. A fundamentally religious concept, race derived its force from presumed divisons between animals, humans, and the divine. Enacting categorical separations at once social, secularizing, and somaticizing, Christians denoted nonChristian collective such as Jews and Muslims as ‘races’ so as to relegate them to the realm of the merely corporal-animal.

Justine Walden is a transnational historian of religion, thought, society, and culture in early modern Italy, Europe, the Mediterranean, Central Africa, Brazil, the Caribbean, and North America. She has published on traditional topics in early modern religion such as Protestant bibles and printing, late medieval Observant reform, heresy and religious deviance, and Jewish-Christian-Muslim relations in Europe and the Mediterranean. Her current projects examine how early modern Christianity interacted with race and enslavement in Europe and in the Atlantic. Her first book The Devil in the Renaissance (Brepols, 2023) analyzes exorcisms conducted by Renaissance monks in Lorenzo de’ Medici’s Florence to illuminate a lost world of late medieval religion. In a kaleidescopically rich religious landscape populated by demoniacs, clerics, and recalcitrant donkeys, religious groups manipulated media, status, and urban politics while Observant reform, persecution, and newly politicized concepts of the demonic spurred the thought of Renaissance figures such as Girolamo Savonarola and Niccolo Machiavelli.

Walden received a joint Ph.D. in History and Renaissance Studies from Yale University. Her MA (American Studies) and BA (Philosophy) are from The University of Pennsylvania and UC Berkeley, respectively. Walden’s work has been generously supported by the MacMillan, Kress, and Cutler Foundations, the Medici Archive Project, the Newberry Library, and the Renaissance Society of America.