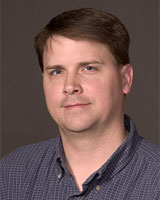 The Persica of Ctesias in Its Near Eastern Context

The Greek historian Ctesias (Ktesias) served as a doctor to the Achaemenid Persian king Artaxerxes II (reigned 404-358 BCE). Ctesias wrote an extensive history of the Persian Empire, the Persica, to his time. Only fragments of this work survive, scattered in various ancient authors and in a severely-truncated epitome by the Byzantine patriarch Photius (9th century CE). This project aims to place Ctesias and his work in its ancient Near Eastern context. His impact on the Greek historiographic tradition was enormous, especially with regard to the motifs of the effeminate and easily-manipulated monarch, the licentious queen, and the conniving eunuch. Ctesias’ variant versions of Achaemenid Persian history will be considered first not simply as wild, preposterous fantasies but rather adaptations preserved within (and indebted to) Mesopotamian and Persian oral and cultural traditions.

Matt Waters is a UW-System fellow, Professor of Classics and Ancient History at UW-Eau Claire. He received his Ph.D. in Ancient History (Near Eastern and Greek) from the University of Pennsylvania. His main research interests are Achaemenid history and Greek historiography. He was the winner of the Greenfield Prize from the American Oriental Society in 2006 and has been awarded fellowships from the American Council of Learned Societies as well as Harvard University’s Center for Hellenic Studies and Loeb Classical Library Foundation. Recent published work includes numerous articles on various aspects of first millennium BC history, especially Greek-Persian relations. Other works in preparation include a survey of Achaemenid Persian history (Cambridge U Press).