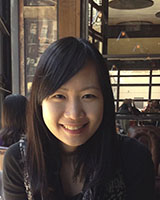 Screen Culture, Visual Power, and the Beyond: A Transmedia Archaeology of the Cinema in Colonial Taiwan, 1895–1945

Cinema in colonial Taiwan is, by its nature, transmedia and transnational, unfolding a film history beyond films. Rethinking cinema through media archaeology, this project explores the intricate connections between visuality and power, and it aspires to layer a colonial experience of cinema on to the ontological ground of the medium. Considering cinema as a historical event, the visual dominance of which intertwines with the technological capacities and imperial control of its time, this dissertation examines the early film history in colonial Taiwan with various “cinematic situations,” including the magic lantern shows, spatial sensibility in the movies, filmic realism in the news, soundscape of the local through films, and the mobility of film workers under wartime conditions.

Laura Jo-Han Wen is a Ph.D. candidate in the Department of East Asian Languages & Literature at UW-Madison. Her research explores issues at the convergence of colonial modernity, visual culture, media archaeology, the history of early cinema, and transnationalism. As a Taiwanese, she is interested in thinking about the ways in which her Taiwan experience might contribute to, or sometimes confront, current scholarship and intellectual fields. From 2012 to 2013, she served as the president of the North American Taiwan Studies Association (NATSA), a US-based NPO dedicated to Taiwan studies and transdisciplinary research. She is at work on her doctoral dissertation concerning Taiwan’s early film history and cinematic culture, tentatively entitled, “Screen Culture, Visual Power, and the Beyond: A Transmedia Archaeology of the Cinema in Colonial Taiwan, 1895–1945.”