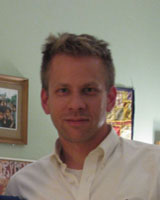 Who Answers When the Landlord Calls? Interpreting Property and the ‘German Idea of Freedom,’ 1650-1800

Using small case studies in Germany in the period under study, the project traces relationships between abstract theories of human freedom and specific conflicts over property rights in early modern Germany, specifically in the Hessian and Rhine-Main region. This study deepens our understanding of the foundations of market society and liberalism in Europe. The book’s intellectual sketch is based on numerous court, academic and ministerial documents, while the social narrative will be plotted on the basis of social network analysis of the thousands of small actors and writers. Relationships among statesmen, lawyers and professors will be measured specifically for clustering, bridging and node-centrality.

Colin Wilder is a Solmsen Fellow at the Institute for Research in the Humanities. Colin finished his PhD in History at the University of Chicago in 2010. In 2010-2011, he taught courses at Brown University on”The Emergence of Capitalism in Early Modern Europe” and “Prosperity and Poverty: The History, Ethics and Economics of the Wealth of Nations.” Colin’s article, “Teaching Old Dogs New Tricks: Four Motifs of Legal Change from Early Modern Europe,” will appear in the February 2012 issue of History and Theory. His essay, “The Importance of Beginning, Over and Over,” was published in Intersections, Vol. 25 (Leiden: Brill Publishers, 2011), and a related essay, “Zu unterschiedlichen Formen der Historizität in der deutschen Rechtsgeschichte des 18. Jahrhunderts” will appear later this year in the volume Geschichtskulturen um 1700, edited by Thomas Wallnig (DeGruyter). He is also developing a large database of jurists and other authors of the German Enlightenment entitled “The Republic of Literature” (see link below). Colin’s research interests include the development of commercial society; liberal legal and economic systems; natural law and rights theories; and the problems of history and theory.

The Republic of Literature