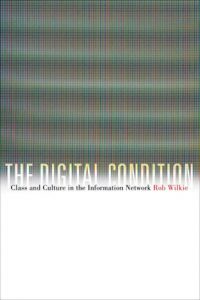 Bionetworks and the Ontological Turn: Aleatory Materialism and the Making of the Geohumanities

My book, tentatively titled Bionetworks and the Ontological Turn: Aleatory Materialism and the Making of the Geohumanities, is a critical analysis of life’s precariousness at a time of rising economic, environmental, and social conflicts, and the way contemporary (post)humanities interpret this precarity as ontological. Through a sustained dialogue with representatives of the “ontological turn”—including New Materialism, Speculative Realism, and Object-Oriented-Ontology—I argue understanding life’s increasing precarity requires an earthly and worldly “geohumanities,” by which I mean a re-turn to history not as existing on a flat, ontological plane, but as a dialectical relation of the human and the nonhuman.

Rob Wilkie is an Associate Professor in the Department of English at the University of Wisconsin-La Crosse. His books include The Digital Condition: Class and Culture in the Information Network (Fordham University Press, 2011) and the co-edited collection Human, All Too (Post)Human: The Humanities After Humanism (Lexington, 2016). In addition, his work on digital culture, posthumanism, and pedagogy has appeared in such books and journals as Media and Class (Routledge, 2017); Post-Industrial Society (Sage, 2010); Nineteenth-Century Prose; the minnesota review; International Critical Thought; Nature, Society, and Thought; JAC; and Textual Practice.