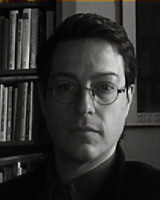 Williams’ IRH project traces the origins of the political lie from Plato up through Hannah Arendt in the twentieth century. He is particularly interested in the foundational issues and theories of philosophical truth that tend either to facilitate these lies or condemn them, and additionally, the relationship of truth to the functioning of democratic institutions. Sections of the book will be dedicated to Plato, Cicero, St. Augustine, St. Thomas Aquinas, Machiavelli, Rousseau, Kant, Schmitt, and Arendt. He has also organized a symposium on the General Will held on the UW-Madison campus in October 2008.

David Lay Williams is Associate Professor of Philosophy and Political Science at the University of Wisconsin—Stevens Point and in 2008-09 Honorary Fellow at the Institute for Research in Humanities. He is the author of Rousseau’s Platonic Enlightenment (Pennsylvania State University Press, 2007), which argues for re-reading Rousseau in light of his evident enthusiasm for Plato. He has published numerous essays on political theory and the history of political thought in journals such as The Journal of the History of Ideas, History of Political Thought, Polity, Telos, and Critical Review on Hobbes, Rousseau, Kant, Habermas, deliberative democracy, and terrorism.Williams received his PhD in Government from the University of Texas at Austin in 1999 and has earned a grant from UW-Madison’s Center for European Studies and a previous System Fellowship from the Institute for Research in the Humanities in 2003-04. In addition to his work on deception, he is co-editing a volume on the General Will with James Farr at Northwestern and writing a commentary on Rousseau’s Social Contract.