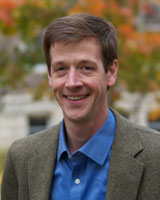 In 1808, Congress forbade the importation of foreign-born slaves into the United States and the interstate (or domestic) slave trade became the only legal method of buying and selling human chattel before the Civil War. Yet historians believe that traders continually violated the international ban in a clandestine slave trade. This book-length study will investigate the clandestine trade from several different perspectives including the evolving African and African American ethnicities within slave communities, the perception of the trade in the antebellum media, the impact on politics and sectional division, and the way the trade has been remembered in American memory.

Lee Willis, UW System Fellow, is an Assistant Professor of History at the University of Wisconsin- Stevens Point. His research interests include the Atlantic Slave Trade and the African Diaspora as well as race and reform in the American South. His first book, Southern Prohibition: Race, Reform, and Public Life in Middle Florida, 1821-1920 will be published by the University of Georgia Press in October, 2011. Willis earned a B.A. in History from the University of the South and his M.A. and Ph.D. from Florida State University.