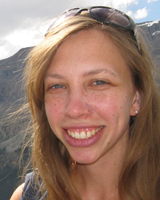 The Legend of Kitezh in Russian Literature

Lisa Woodson’s dissertation centers on the Russian legend of the hidden city of Kitezh and its changing representations over time in Russian literature. According to the legend, the righteous city of Kitezh became invisible or disappeared into a lake and was thus saved from contamination by the surrounding evil world. Lisa’s research shows how the legend, initially associated with a dangerous strain of religious fanaticism, came to be broadly embraced by 20th-century Russian writers as a symbol of authentic Russian culture. Her research focuses on a number of authors who made the Kitezh legend a focal point of their philosophical systems and literary works, showing how these authors adapted the legend to suit their philosophical and artistic needs, thereby changing the contours of the legend and contributing to its literary evolution.

Lisa Woodson, a Dana-Allen Dissertation Fellow, is a graduate student in Slavic Languages and Literature at the University of Wisconsin–Madison. She has taught Russian language, literature, and intellectual history at the University of Wisconsin and the University of Missouri. A Madison native, Lisa returned to Madison for graduate school after living abroad in Russia and Canada for several years, where she continued her studies and worked in the Russian environmental movement. She also holds a master’s degree in spiritual theology from Regent College in Vancouver, Canada, and a bachelor’s degree in Russian Area Studies from Wellesley College in Massachusetts.