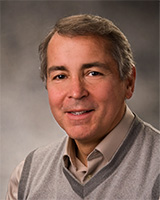 Through its recent decision in Obergefell v. Hodges, the Supreme Court has required states to license same-sex marriages and to recognize those performed out-of-state. This epochal step has come upon several others in a long struggle for the recognition of the rights of LGBT people. Among these are the High Court’s holdings in Windsor and Hollingsworth (2013) as well as its earlier decision in Lawrence v. Texas (2003). But, the jurisprudence that these cases develop lies in a line with a prior case, Romer v. Evans (1996), in which the Court posed the question of gay rights in an explicitly political context. The project I will pursue at the Institute is a book-length treatment of American law, society and political community in con­testation and evolution.

George Wright is Professor Emeritus of Human Behavior at UW-Superior. He grew up in Chicago and attended a small, Lutheran college in the area. He took a master’s degree in Classics at Columbia University and then moved to the land of the Romans, living one year in Rome and another in Perugia in central Italy. Returning to the U.S., he took a law degree at Valparaiso University and then pursued the PhD at University of California, Berkeley, spending a semester in Freiburg im Breisgau, Germany, as a DAAD fellow. He found employment at the northern-most campus of the University of Wisconsin System and recently retired after 28 years in that position. While there, he enjoyed fellowships both at Madison’s IRH and at the Netherlands Institute for Advanced Study (NIAS). His research interests have focused on seven­teenth-century political philosophy, with particular emphasis on Thomas Hobbes, and in American constitutional law. He loves to sing choral music. He is at work on a project entitled “Democratic Citizenship and Gay Rights.”