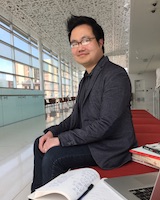 Asian American writers have historically been read as minority writers within U.S. national culture, responding to practices of exclusion, racism, and discrimination that have characterized American relations with Asian immigrants and their descendants.  Recently, the study of Asian Americans has moved toward diasporic frameworks that reject cultural nationalism in favor of an emphasis on the ongoing connections between Asian Americans and their countries of origin. Diasporic Poetics investigates diasporic Asian writing not through reference to origins, but through comparisons among “Asian” writers in majority-white Anglophone societies: the U.S., Canada, and Australia.  The perspective on diaspora that emerges from this study emphasizes intellectual and textual circulation among groups racialized as “Asian” in divergent national spaces. The panethnic racial category of the “Asian” is revealed as a traveling concept that has circulated and adapted in three different national contexts.

Timothy Yu is professor of English and Asian American studies at the University of Wisconsin-Madison.  He is the author of Race and the Avant-Garde: Experimental and Asian American Poetry since 1965 (Stanford UP, 2009), which won the Book Award in Literary Studies from the Association for Asian American Studies, and the editor of Nests and Strangers: On Asian American Women Poets (Kelsey Street, 2015).  He is also the author of a collection of poetry, 100 Chinese Silences (Les Figues Press, 2016).  His writing has recently appeared in the New York Times Magazine, The New Republic, and Poetry.  He has served as director of the Asian American Studies Program at UW-Madison and as editor for Contemporary Literature.