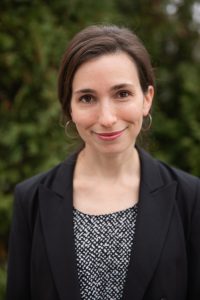 Against Jewish Humor: Toward a Theory of Yiddish Joy

While mocking laughter is frequently associated with Yiddish in American discourse, joy rarely is. Against Jewish Humor: Toward a Theory of Yiddish Joy proposes a new emotional history of Jewish American and Yiddish culture. Rejecting essentializing narratives of Jewish American humor, the project traces how ideas of joy circulated in Yiddish texts in Europe and America, and were subsequently translated and re-signified in English popular discourse. Drawing on works of textual, visual, and aural culture, the project speaks to scholars of Jewish studies, American studies, affect theory, translation studies, and comparative literature.

Sunny Yudkoff joined the Department of German, Nordic, and Slavic, as well as the Mosse/Weinstein Center for Jewish Studies, in the fall of 2016. Her research and teaching focuses on Jewish literary production from the mid-nineteenth to twenty-first centuries. Her first book, Tubercular Capital: Illness and the Conditions of Modern Jewish Writing, was published with Stanford University Press (2019). Her work has appeared in Comparative Literature, Prooftexts, Jewish Social Studies, Literature and Medicine, and elsewhere. She is currently at work on her second monograph, Against Jewish Humor: Toward a Theory of Yiddish Joy.