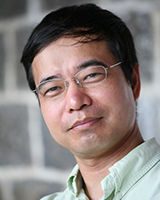 Chasing Happiness: The Unhappy Life of a Western Ideal in China, 1890-2010

This project examines the travel of and subsequent changes in the Western concept of “happiness” as it has been exported to East Asia from the late nineteenth century onwards. It focuses on the term’s diverse reinterpretations by the Chinese in the process of its naturalization as a cultural keyword and organizing aspiration in contemporary China. Drawing on existing theoretical inquiry regarding traveling theory, translation, cultural translation, and globalization by literary critics, anthropologists, historians, and linguists, this interdisciplinary project aims to contribute to the discussion by 1) historicizing the transnational circulation of the concept of “happiness” over the last century; and 2) adding a contemporary dimension to deciphering the meanings and implications of the concept through ethnographic research.

Yongming Zhou is a Professor of Anthropology at UW-Madison. He received his Ph.D. in cultural anthropology from Duke University. In 2001-2002, he was a Fellow at the Woodrow Wilson Center for International Scholars. He is the author of Anti-Drug Crusades in Twentieth-Century China: Nationalism, History, and State-Building (Rowman & Littlefield, 1999) and Historicizing Online Politics: Telegraphy, the Internet, and Political Participation in China (Stanford University Press, 2006). He has also been a Mellon Fellow at the Needham Research Institute at Cambridge and a visiting fellow at the East Asian Institute at the National University of Singapore. He served as the president of the Midwest Conference on Asian Affairs in 2012. His latest “roadology” project focuses on the socio-cultural impacts of transnational road building on the edge of the Tibetan Plateau and in the Great Mekong Subregion, where he has conducted fieldwork since 2006. He is at work on a project entitled Chasing Happiness: The Unhappy Life of a Western Ideal in China, 1890-2010.