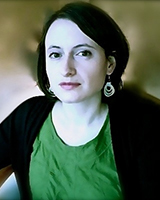 This project shows how pastoral literature—especially pastourelle poetry—became a privileged site for French explorations of cultural and linguistic difference in the Middle Ages. The generic framework of the pastourelle poem—in which an errant knight encounters, and subsequently often rapes, a shepherdess—entangles cultural and linguistic difference with sexual power and class hierarchy. Borderlands turns to Occitania, Flanders, the Basque Country and England as imagined in francophone poetry.

Eliza Zingesser is an Assistant Professor in the Department of French and Romance Philology at Columbia University. She has published on medieval and Renaissance literature in journals such as Modern Language Notes and Modern Philology. She is particularly interested in assimilation, multilingualism, cultural and linguistic contact, and gender and sexuality. In addition to Borderlands, she is at work on a book project on the early francophone reception of troubadour lyric.