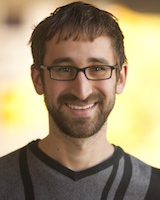 Cult of Personalities: The Influence Economy of Digital Culture

My dissertation uses the concept of celebrity labor – the creation and maintenance of a public persona for the creation of capital – as a framework to study the performance and construction of the self on social media platforms. A new economic imperative has emerged that prioritizes ‘influence-based marketing’ over broadcasting and narrowcasting models and can be seen in personal, political, and corporate online profiles and their activity. I contest that social media, neoliberalism, and post-Fordism have encouraged an influence economy that rewards cultural and financial capital to those who with dedicated and desirable online audiences.

Andrew Zolides is a Ph.D. Candidate in the Communication Arts Department at the University of Wisconsin-Madison. He is also currently a Fellow at the Institute for Research in the Humanities at UW. His research explores the influence economy, an economic framework for understanding the strategies celebrities and brands utilize through social media to generate audiences with significant value. Comparing these practices reveals how influence is generated and evaluated in contemporary neoliberal culture. Andrew has served as an editor for Antenna and The Velvet Light Trap, as well as teaching courses such as Survey of Contemporary Media, Critical Internet Studies, and Television Industries. His work appears in Persona Studies, Horror Studies, Antenna, and the forthcoming books Childhood & Celebrity and The New Television Industries. He received his B.A. in Philosophy and Media Studies from the University of South Carolina and his M.A. in Media, Culture, and Communication from New York University.