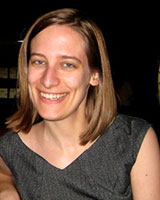 It is often assumed that outside the monastic scriptoria, Anglo-Saxon England was a largely oral, largely media illiterate culture, yet letters and other written documents appear with surprising frequency in Old English literature, including literature that might have been intended for lay audiences. My book project examines the representation of letters in early English medieval literature as a way of understanding Anglo-Saxon inscriptional media. Through study of epistolary form, communication networks, the physical medium of letters, and archives and memory storage systems, this project moves beyond traditional genre study to ask what it is about letters that so appealed to audiences that might never have produced or seen letters themselves, how the orality and textuality of letters shaped Anglo-Saxon ideas about publication, and what letters reveal about how Anglo-Saxons negotiated complex questions of faith, such as how to communicate with an absent God and how to record and circulate miracles that left no tangible trace.

Jordan Zweck is a resident fellow at the Institute for Research in the Humanities and an assistant professor in the Department of English at the University of Wisconsin-Madison. She specializes in early medieval vernacular literature and culture, especially Old English, and is also interested in the history of the book, the history of the English language, and medieval lay piety and pastoral care. Zweck is a recipient of the University of Wisconsin-Madison Center for the Humanities’ First Book Award and is affiliated with the Department of Scandinavian Studies. She is currently working on a book on Anglo-Saxon epistolarity and early English media, examining the representation of letters in vernacular texts such as letters from heaven, Anglo-Saxon hagiography, and epistolary prefaces.